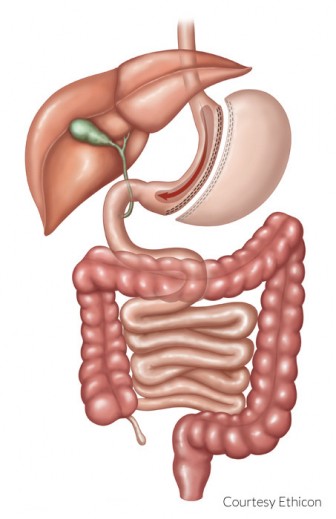 The gastric sleeve, also known as sleeve gastrectomy or vertical sleeve gastrectomy, is currently the most popular bariatric surgery procedure in the United States. The sleeve is one of the primary weight loss surgery procedures offered by Dr. Shawn Tsuda and Dr. Heidi Ryan in Nevada. Gastric sleeve surgery started as the first part of the two-part duodenal switch. This was especially helpful for extremely obese patients (BMI >60) who needed the sleeve as a way to reduce their BMI before going in for the second, malabsorptive surgical procedure. However, over time, surgeons and patients realized that the gastric sleeve was effective by itself. As a result, the sleeve was adopted as a major standalone bariatric procedure.

How The Gastric Sleeve Works

Part of the popularity of the gastric sleeve revolves around its simplicity. Approximately 75 to 80% of the stomach is separated and removed from the abdomen. The division is made along the greater curvature of the stomach which results in the remaining stomach being about the same size and shape as a banana or a sleeve. Hence the name. The procedure requires approximately one hour of operative time under general anesthesia and can be performed in a hospital or outpatient surgical setting. Almost all of our gastric sleeve surgeries are performed laparoscopically or with robotic assistance. This involves four or five small incisions in the abdomen and a quicker recovery time with fewer potential complications when compared to open surgery, including a decrease risk of developing an incisional hernia.

Results of the Gastric Sleeve

Of course, as with any bariatric procedure, results will vary, usually based on the willingness and ability of the patient to follow their prescribed lifestyle changes. However, most gastric sleeve patients should expect to lose between 60 and 70% of their excess body weight. This is significantly higher than the gastric band and new long-term data shows that it is comparable to the gastric bypass over several years after surgery. Most importantly, many of the diseases associated with obesity such as type II diabetes, high cholesterol, high blood pressure, sleep apnea and more are resolved or improved significantly.

The Benefits of the Gastric Sleeve

As mentioned before, one of the greatest benefits of the gastric sleeve is that it is a relatively simple procedure that comes with fewer risks and lifestyle limitations when compared to a gastric bypass or a duodenal switch. Further, since the gastric sleeve is performed laparoscopically or minimally invasively, the risk of blood loss, pain and infection is reduced while hospital stay and recovery is significantly shortened.

Some patients will also benefit from a reduced feeling of hunger as a result of the fundus of the stomach being removed during surgery. The fundus is a significant source of the hunger hormone ghrelin. When the stomach is divided and removed, it can no longer produce this hormone. Since there are other ghrelin production centers in the body, not all patients will experience this benefit, but we estimate about 50% of patients do.

Gastric sleeve patients will also benefit from a somewhat more liberal dietary regimen than those who undergo a gastric bypass or duodenal switch. This is because the digestive system remains largely intact, including the pyloric valve between the stomach and small intestine. Patients do not experience dumping syndrome as with the gastric bypass and do not have an implanted medical device as with gastric band. While most patients will remain on a daily multivitamin for the rest of their lives, their risk of vitamin and mineral deficiencies is much lower compared to a malabsorptive procedure.

Risks of the Gastric Sleeve

As with any major surgical procedure, there are inherent risks of surgery, which can include a reaction to general anesthesia, blood loss, pain, infection and in very rare cases, death. The standardization of gastric sleeve technique, as well as improved surgical techniques and equipment have made the gastric sleeve procedure exceptionally safe – comparatively along the lines of a gallbladder removal.

There are also risks associated with any abdominal procedure, which can include the injury to nearby organs during surgery, incisional hernias and more.

Lastly the risks of the gastric sleeve in particular can include, although rarely, leaks from the staple line which require a corrective surgery. Longer term patients who do not follow their post-operative diet risk stretching the stomach pouch and regaining weight. In some circumstances, a revisional bariatric surgery my be appropriate. Interestingly, some patients may see their reflux worsen, while others may develop reflux after surgery.

Ultimately, the majority of patients who undergo gastric sleeve surgery are very successful and find that their postoperative diet and exercise plans are not as drastic as they first thought. With long-term data showing that the gastric sleeve is comparable in excess body weight lost and disease resolution to the gastric bypass, there is a very compelling case for this procedure.

Contact us for more information about the gastric sleeve procedure.

Back to Bariatric Surgery
Start Your Online Seminar