On April 1, 2020, the FDA announced a recall of ranitidine, also known as Zantac, a common medication used to treat reflux in adults and children. Removing this medication from shelves and urging all users to dispose of the drug and cease taking it comes after months of warnings and increasing concern about the potential dangers of a suspected carcinogen NDMA (N-Nitrosodimethylamine). Research concluded that the levels of NDMA were above what is considered to be safe. Warmer storage temperatures of ranitidine containing products, like Zantac, can lead to an increase in concentrations of this suspected carcinogen. Levels were also seen to increase with time, meaning the longer the product was on the shelf, or say in your medicine cabinet, the higher the dangerous NDMA levels could climb. With all of this in the news, many GERD sufferers are exploring their options without ranitidine. 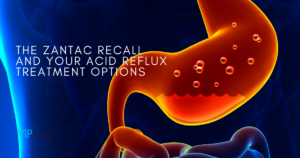 How We Treat GERD: Maintenance vs Fixing the Problem

Most of us have experienced occasional heartburn and GERD is estimated to impact 20-25% of the US population.

When talking about acid reflux treatments, patients are typically directed in steps. Reflux is impacted by diet and your overall health and lifestyle, including a known correlation with obesity. So, the first recommendation is often changing diet and losing weight. When there is increased pressure on the abdomen due to excess weight, the uncomfortable and damaging back flow of acidic stomach contents into the esophagus occurs more easily. If your BMI, or body mass index, is greater than 35, you may consider weight loss surgery, and specifically gastric bypass, to treat your excess weight and potentially reduce your reflux as well.

When these initial modifications fail to alleviate symptoms, patients are often directed to incorporate over-the-counter meds, then prescription strength medication. Here, we often hear the terms “H2 blocker” and “PPI.” Ranitidine drugs are in the H2 blocking camp, which work by disrupting the histamine receptors in the stomach. PPIs, or Proton Pump Inhibitors, work by inhibiting the enzyme essential in the final step of acid production in the stomach. Both medications function by decreasing the amount of acid in the stomach, which in and of itself can be problematic when it comes to digestion and absorption of nutrients. Moreover, the root problem of reflux isn’t in fact the acid levels, but where the acid goes.

Reflux exists because of a weakness in the Lower Esophageal Sphincter, or LES. This is the valve-like opening between the top of the stomach and the esophagus. Tackling this weakness can be done surgically with a few different methods including the LINX device and fundoplication. However, only when patients do not receive the appropriate relief from more conservative measures, do we consider surgery to fix this root cause.

In some patients, GERD may be attributed to by a hiatal hernia -the herniation of the stomach through the opening in the diaphragm (hiatus) where the esophagus normally passes. This is also something that can be fixed in a relatively simple surgical procedure and is often the second part of a bariatric procedure.

What Steps Should You Take Now?

If you are currently taking or still have Zantac or other ranitidine-containing medication, per the FDA, you should discard the product and discontinue taking it immediately. There are alternatives that do not contain inappropriate levels of NDMA. Next, discuss your heartburn and symptoms with your doctor.

If you aren’t receiving enough of a therapeutic effect from medication or lifestyle modification, or if you had unacceptable side effects due to GERD medication, we recommend you take some time to research your surgical options and consider whether a minimally invasive fix might be right for you. Remember that medications used to treat GERD are functionally only treating your symptoms, not fixing the issue.  A consultation can be scheduled through a referral from your primary care provider or gastroenterologist, or you can simply call our office to schedule on your own.